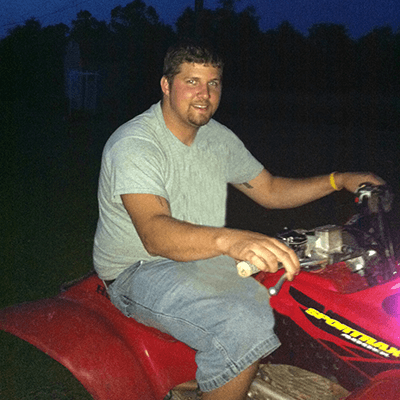 I would like to tell you about my son, Jacob (Jake). At the age of four he asked Santa for a motorcycle. He couldn’t even ride a bicycle yet, but he was determined to keep that motorcycle upright. He soon mastered it and so began his love of motorcycles. His dream was to be a professional motocross rider.

Motocross is a dangerous sport. During his racing career, Jake suffered multiple broken bones including an ankle and leg, along with many other injuries. Still, the danger never silenced his spirit. As a mother, I tried to discourage him and reason with him about the risks and consequences. But he would just look at me and say, “But mom, I am doing something I love!” How could I ever argue with that?

On Memorial Day weekend of 2012, Jake was riding his four-wheeler home when he was struck by a car driven by a man with no license. The man did not stop but just left Jacob lifeless on the road. He passed away later that evening, but the story of his kindness and caring heart does not end there.

Jacob was always a caring person, especially toward animals. He would bring strays home rather than leave them wandering homeless. So, it should be no surprise that kindness would extend to people too. At the young age of 16 Jake decided on his own to become a registered organ, eye, and tissue donor. Honestly, at the time of his death, his decision of 8 years earlier to be a donor was the furthest thing from my mind. My world had stopped and information like that simply slipped my mind.

But, early the next morning, I received a phone call from the hospital about it. The hospital walked me step-by-step through all of the information but had no idea it was so involved. I have been a nurse for 20 years and only assumed it was for vital organs. The hospital explained they could recover skin, ligaments, bone, and corneas.

I readily agreed, largely because that was Jake’s wishes and I thought some good could come from this tragedy. In his final act of kindness, my son would help some 76 people thanks to his tissue donation. In fact, depending on the case, up to 125 recipients might benefit from a single donor.

A few days after the accident, we found one of Jacob’s racing number plates. On it he had written, “Never Give Up on Your Dreams,” with the date and his signature. This has become the motto that we proudly wear on the annual Memorial Ride, that we started in his memory. Because of my son’s thoughtful act, donation has become a very dear cause to my heart. I try to talk about the importance of organ, eye and tissue donation at every opportunity in the hope it can help so many others.

So, I ask each of you to give this one last selfless gift. Register as a donor. You could give as many as 125 people a chance to live their dream.